Back in July, we got a sneak preview of Cliff Garten's "Gravity and Grace," a new public artwork created especially for Rosslyn's Central Place Plaza. We also talked to Garten to learn more about his process for creating it. The final artwork went live in mid-August, 2018. We are delighted to have it as a permanent part of the neighborhood! Drop by Central Place Plaza anytime to check it out.

It's a Friday afternoon in July, and the internationally renowned sculptor Cliff Garten is sitting at a table in Rosslyn's Compass Coffee waiting for a pour-over. The music of The Stones, The Doors and other '70s rock bands thrums throughout the space. Garten is smiling, well put-together and upbeat. He's happy to speak about his new artwork, "Gravity and Grace," which he's been installing with his team at Central Place Plaza in Downtown Rosslyn. The site-specific, large-scale LED public artwork is integrated into the architecture of Central Place's residential tower. Providing an ever-changing spectrum of intense color, the piece will operate amidst Rosslyn's busy urban environment.

Garten's studio is in Los Angeles, but he's been in town all week working to get "Gravity and Grace" ready for a preview the following Tuesday night. It's probably been the hottest week of the summer, so he's grateful that he and his team have been able to do much of the computer programming and tweaking from an air-conditioned storefront on the plaza.

"I'm absolutely exhausted right now," he admits. "We're here every night until 4 in the morning. I've been trying to sleep but my schedule is all backwards."

But Garten's fatigue doesn't dampen his enthusiasm for the art, which is part of a bigger project in Rosslyn called "Corridor of Light." Besides the "Gravity and Grace" LED wall, "Corridor of Light" will include four large, translucent, light-filled sculptures: Two will salute visitors crossing the Key Bridge into D.C. from Rosslyn and Arlington County, and two will be positioned on the Esplanade Bridge over Interstate 66. Garten describes the project as "monumental," noting that it reflects the civic monumentality of the Washington, D.C., region.

"The 'Corridor of Light' sculptures at Gateway Park will provide a grand entrance into Rosslyn," he says. "They're 24 feet tall. They'll offer an extension of Washington, D.C.'s, large-scale formality, but they are not opaque stone or bronze. They are transparent illuminated volumes that will brand Rosslyn for the 21st century."

Work on the Gateway Park sculptures is scheduled to be completed in about two years. After that, Garten will create similar sculptures for the Meade Street Bridge, but that work is farther off in the future.

Although he considers himself a sculptor first and foremost, at the request of developer JBG SMITH and with support from Arlington County's Public Art Program, Garten created an LED color wall for the plaza, which is not the kind of work he typically does. He says he's enjoyed the collaboration on this project.

Public art is all about context

"A public artist always has to be flexible and adaptable," Garten says. "And a good artist should be able to work with any medium. A big, flat wall is a painterly space. I'm not a painter, but I am a colorist. As a sculptor I usually create the object. In this case, the architecture defined the object. That was a challenge: How do I address the 150" long, 15' high horizontal composition of the parking structure that had to be illuminated?"

Whatever the medium, Garten always seeks to gain a firm understanding of the context for a piece of public art before he begins. In the case of "Gravity and Grace," he knew that the work needed to be subtle. It's meant to operate in the background, making the plaza more inviting but not distracting people from events or their own everyday activities.

"It isn't supposed to be something you slug somebody with," he says. "It offers a big splash of color, but it's still sly like a fox. If you sit there for a while drinking your coffee and watching it, though, you'll notice its complexity. There are so many layers to it."

Garten says the work of American conceptual artist Sol LeWitt influenced him in creating this piece. LeWitt made art through systems, he says, and "Gravity and Grace" is the most systems-oriented piece he's ever done. This is where his partnership with Pablo N. Molina of PNM Designs and Norm Schwab of Lightswitch has been invaluable. Garten brings his feeling for color, which he considers an emotional element in art, and Molina and Schwab give structure to his ideas.

"I've had to make a lot of aesthetic decisions: the color field, the size of the squares and rectangles, the fade-ins and fade-outs. There are frames. There are waterfalls. There's kinetic movement in and out of these solid blocks of color," Garten says. "It's mathematical, too. We do a lot of inversion of colors. We'll have a blue square in an orange border, and then the frame and ground will switch and the orange border will become the center blue square and the center blue square will become the orange border in the next panel. We'll do a full spectral shift, which occurs over time." 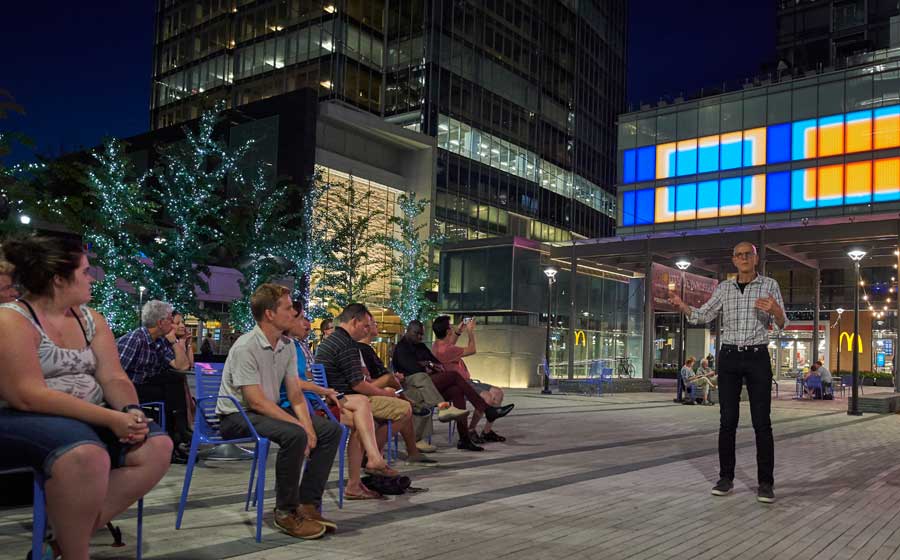 Although Garten and his team programmed the work to show specific colors and images for the half-hour preview in July, since the work went live, real-time environmental data is determining the geometric color shifts. Arlington's traffic patterns, temperature, river levels and water usage are some of the data feeds that will affect how the artwork's colors change. To achieve this, Molina worked with Garten to write algorithms that incorporate the data into an aleatory system that drives the color and motion transitions of the art.

"There's a long tradition of aleatory works or works based on chance in contemporary art where you throw the dice and see what happens. What we've set up is highly structured, programmed and data dependent, but it's also completely based upon chance, because we don't know, for instance, what the temperature will be on any given day," Garten says. "Pablo [N. Molina] is one of only a dozen people in the world who understand how to interpret and program environmental data in this way. I'm fortunate to have such an incredible team."

To experience "Gravity and Grace" firsthand, be sure to visit Central Place Plaza. Darkness will give you the opportunity to see the most brilliance in the color. And stay tuned for details on further progress on the rest of Garten's "Corridor of Light."

"'Gravity and Grace' has been a whole new thing for me. Working with a flat wall, my approach has been more painterly than sculptural," Garten says. "I've learned so much from this project, and I could not be more pleased with the results. The color shifts are subtle and stunning at the same time. I am very grateful for the opportunity that Arlington Public Art and JBG SMITH provided to me. What I think Rosslyn has to look forward to is when both the Esplanade Bridge adjacent to Gateway Park and the Mead St. Bridge become illuminated gateways. There will be a sense of a continuous colored illumination of the corridor, creating an urban continuity on N. Lynn St. Rosslyn will be redefined by these dynamic artworks."