With the holidays approaching, it's a great time to shine a spotlight on the many kind and giving members of our Rosslyn community. In this series, Rosslyn Cares, we feature stories from our neighborhood that remind us of the importance of taking care of others and being thankful for what we have.

From building playgrounds to feeding the hungry, Rosslyn companies and residents are doing good

Even if it sometimes seems that Americans of different viewpoints are growing farther apart, it's encouraging to note that giving to charity in the United States is actually on the rise. Charity Navigator reports that total charitable giving in the U.S. in 2017 had risen to $410.02 billion. While most of this money came from individuals, who made 70 percent of all charitable donations that year, businesses still contributed their share. In 2017, charitable giving by corporations grew by 8 percent to $20.77 billion, representing 5 percent of all donations.

There are many ways corporations give, including through corporate sponsorships, employee matching contributions, and non-cash contributions, such as team volunteer activities. We caught up with three Rosslyn companies and one resident who are making an effort to give back. While this list doesn't include many other wonderful examples of giving in Rosslyn, it provides a snapshot of a few inspiring examples.

Accenture's annual day of service is "Making a Difference"

Accenture, which opened their Cyber Fusion Center in Rosslyn in June 2018, hosts an annual day of service in October. This year's theme was Making a Difference. More than 2,000 employees volunteered at 100+ service project sites across the D.C. metro area, including 40 sites in Virginia. They worked in parks and on urban farms, served food, provided job skills and more. This year, area Accenture employees volunteered across the region with organizations including Arlington Free Clinic, D.C. Central Kitchen, Common Good City Farm and Byte Back. Accenture also offers employees access to the myGiving digital platform that makes it easy for them to support causes they care about. Employees can sign up to participate or organize a volunteer event, donate to a cause, create a fundraiser to share with colleagues, share their community engagement story or earn matching dollars to donate to a charity of their choice. Accenture has a strong corporate social responsibility philosophy that links the company's innovative work with a mission to help build a more equal and inclusive society.

Founded in Rosslyn in 2016 by brothers Shy and Eman Pahlevani, HUNGRY Marketplace offers businesses access to a network of talented chefs who prepare unique, tasty meals from a variety of culinary traditions that are a delicious departure from traditional catering. The company recently launched its second market, Philadelphia, and is planning to expand to five additional cities across the country in 2019. Committed to improving people's lives in the communities it serves, HUNGRY partners with Feeding America to donate one meal to a less fortunate person for every two it serves. Through this Fight Against Hunger program, to date HUNGRY has donated over 80,000 meals to people in need. By the end of November, they expect that number will surpass 100,000. HUNGRY also runs a green initiative program called WeRecycle to care for the environment. The company uses mostly biodegradable products for their caterings that are made primarily of starch and corn. When they do need to use items that can't be recycled, such as aluminum pans and metal wire racks, they save them and reuse them for other clients.

HUNGRY Founder Eman Pahlevani says the company's core values are all about empowerment, whether of people in need or of the chefs who join their growing chef network. "We don't have a kitchen, we don't purchase raw ingredients, and we don't do any cooking. We're the first marketplace that connects companies to talented independent local chefs," Pahlevani says. "HUNGRY has created a better and alternative career path for chefs. Rather than taking on the risk of opening an expensive restaurant or rather than working in the back kitchen of someone else's restaurant, chefs can now join HUNGRY's network and get direct access to the lucrative $25 billion dollar corporate catering market. Chefs can set their own schedules, make their own menus, source their own ingredients, and set their own prices. HUNGRY empowers individual chefs who may not have had a great career path until now."

The commercial real estate firm WashREIT, whose Rosslyn properties include Arlington Tower and Bennett Park, has an active community service committee. Although they plan a company-wide service project every year, 2018 was different: WashREIT took on not only a playground build through Make Kids Smile, but also fundraising for the equipment, paints, and supplies. Through two fundraising events, the team garnered enough sponsorships and ticket sales to raise more than $40,000 towards their $12,000 goal. This allowed them to expand the scope of the project from one playground to two playgrounds and a mural. 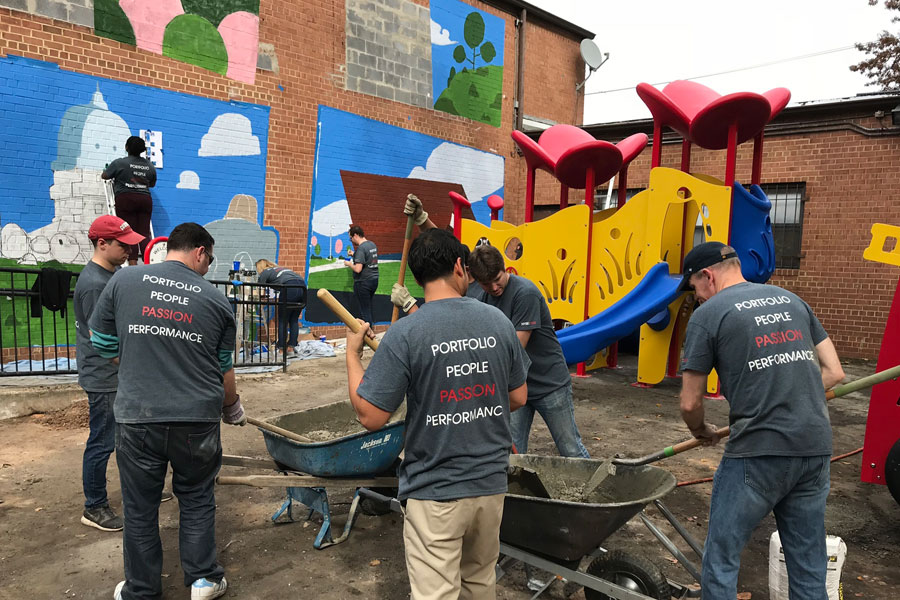 The commercial real estate firm WashREIT raised more than $40,000 to build two playgrounds and create a mural in an underserved neighborhood in Washington, D.C. In October, WashREIT closed their office so more than 100 employees could work together to build the playground.

This was a much heavier lift than service projects they'd attempted in the past, but WashREIT community service committee member Nicole Morrill had taken part in a similar effort at a previous job and felt her current colleagues would enjoy it. The WashREIT team delivered. On November 1, the office was closed and more than 100 employees descended on Stoddert Terrace in the Fort Dupont neighborhood of Southeast D.C. to build the playground. They painted retaining walls, railings, and a mural, helped install playground equipment, did landscaping, improved a path and did general work to refurbish the community’s public space. "This project was very much in keeping with our culture, which emphasizes collaboration," Morrill says. "We believe in collaborating internally and externally. It's how we conduct our business, and it carries over into our community service, too. We also try to take a unique approach to everything we do, whether we're dealing with our tenants and properties or trying to come up with creative fundraisers, as we did with Make Kids Smile."

"There are too many people in the world who lack access to basic medical care due to cost," Istrail says. "I launched Pheo Coffee with the mission of using one of the most consumed beverages in the world to subsidize this care." Each bag of Pheo Coffee sports a beautiful, vintage label, honoring the most important discoveries in medicine, and provides a photo of a person who was helped by the purchase. Dr. Istrail hopes to create a pipeline of happy coffee drinkers funding medical care around the world. The charitable cause coupled with the beautiful apothecary-themed packaging make it an excellent gift for a doctor or nurse, or anyone interested in premium coffee with a cause. 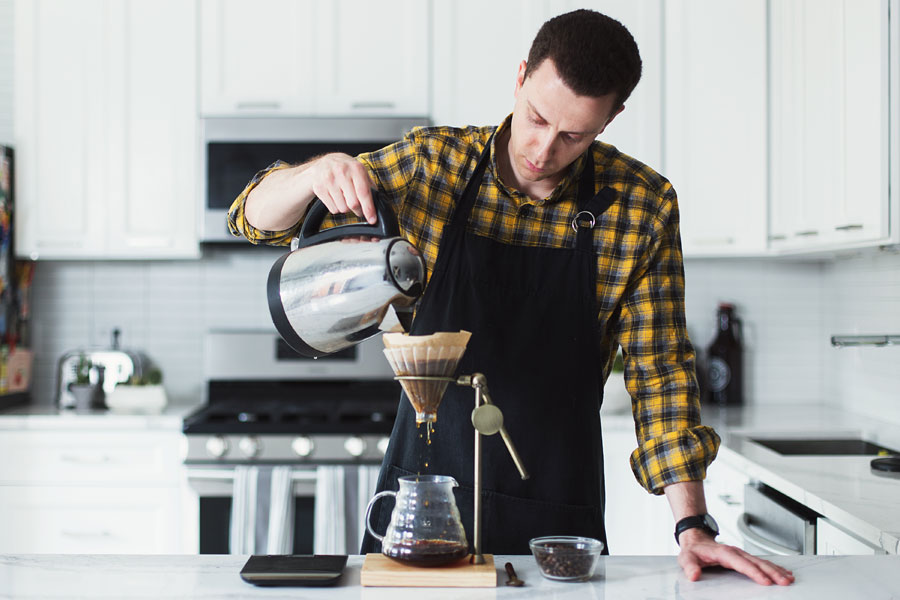 Rosslyn resident Dr. Larry Istrail founded Pheo Coffee as a way to fund surgeries for people in need around the world. Each bag of Pheo Coffee will teach you about an amazing medical discovery and provide a photo of an actual person who was directly helped by your purchase.

Photo at top: The team from Accenture participates in an annual day of service. This year, employees volunteered at several nonprofits throughout the D.C. area, including Arlington Free Clinic and Common Good City Farm, pictured.

A Social Night in the Garden with Northeastern University
Wednesday, November 30
at Continental Beer Garden