In this series, Rosslyn Works, we chat with business leaders in our community. These are the thinkers and doers who make Rosslyn tick! Want us to feature your business? Contact us!

Rosslyn is home to several flourishing startups, including LiveSafe, a first-of-its-kind mobile security app originally developed for universities so students could anonymously report suspicious situations to campus police and seek help in an emergency. Company co-founder Kristina Anderson, who was wounded in the Virginia Tech campus shootings in 2007, hoped it would help prevent similar tragedies in the future. Since then, the company's offerings have expanded, making LiveSafe the leading risk-intelligence communications platform not just for universities, but also for companies and risk-management entities.

LiveSafe's story began in Rosslyn in 2013. One of the company's founders, Jeff Grass, lived in the neighborhood and opened his first office in 1400 Key Blvd. across the street from his townhouse. Like many, Grass was drawn to Rosslyn’s accessibility, connectedness and vibrant urban feel. At first, the team had just five staff. Today, the award-winning app employs more than 70 people. And while Jeff Grass has since moved on from his townhouse, this innovative entrepreneur liked Rosslyn so much he founded two other start-ups here, as well: BuySafe and Try HUNGRY.

The Rosslyn BID sat down with Suraj Shetty, senior sales engineer and one of the key developers for the original LiveSafe software, to discuss the company's beginnings, its future and its low-key workplace culture.

Rosslynva.org: You were here when the company started. How did it get off the ground?

Suraj Shetty: LiveSafe started on the 10th floor of this building. A few people in the initial team lived in Rosslyn, so it was the logical place to start the company. I got involved because I was good friends with Jeff Grass, also a Rosslyn resident at the time, and currently chairman of the board of LiveSafe. He asked me if I could help them out and have a look at what they were working on, and I ended up jumping on board and helping to build the first generation of the back end and the dashboard. The initial team consisted of roughly five people who fit into one office. Today, we have 70 employees and the entire first floor of this same building. We have remote people, salespeople and developers all over the country, but this is still our central headquarters, here in Rosslyn, where it all started.

Rosslynva.org: What do you like about being in Rosslyn?

SS: It's extremely accessible and well-connected. A lot of staff who live farther out in Virginia don't like commuting into the city. At one point we considered Tysons Corner, but staff who live in D.C. didn't want to commute out that far. Here in Rosslyn, people can easily take Metro, with three lines passing through. We also have scooters, bikes and every mode of transportation, and that's hugely valuable. I'm a Rosslyn resident, as well. I live and work within a one-mile radius, so it has been great to witness all the recent growth.

SS: LiveSafe focuses on prevention and on building situational awareness. At Virginia Tech back in 2007, someone must have seen something, but at the time they didn't have an option to report it through an app. The first iPhone didn’t even come out until 2007. LiveSafe now provides that option.

When we first created LiveSafe, the concept of a safety app didn't exist. People didn't know what we were selling, which was very challenging. Now, six years later, it's completely changed and competitors have popped up. Even older emergency notifications systems, like Rave and Everbridge, have started to introduce mobile safety applications as part of their offerings. We integrate with some of them but we don’t see safety apps as a silver bullet. No one app is going to keep you safe, but as you add on layers and create software that plays nicely together, you build a shield that protects you from a variety of threats.

Rosslynva.org: What are some of the most useful features of LiveSafe?

SS: For clients, one of the most important things we offer is the ability to identify risks. They may think they have an issue in one area, but we can use data to show them that there actually may be something else going on. We think about the broad scale of risks, from everyday, low-impact occurrences to low-probability, high-impact events.

Rosslynva.org: Can you tell us of some instances when LiveSafe saved lives or prevented crimes?

SS: We've had multiple examples over the years of college students experiencing mental health crises and potentially feeling suicidal. Friends were able to anonymously report this through the LiveSafe app. In several cases police intervened in time to get these folks help before they harmed themselves.

Probably the most public example of LiveSafe being used effectively is the time when the Women's NBA used it. When they are in the off-season, dozens of their players participate in overseas tournaments. Last year there was a terrorist attack in Istanbul, Turkey. Several players were there, and some were out that evening in the vicinity of the attack. The WNBA was able to account for all of their players in a few hours with LiveSafe, and they were able to broadcast information to their players about the location of the attack so they could avoid the area.

University of North Carolina at Charlotte also uses our app. When the school had a shooting on April 30, our app was a lifeline for many people in the emergency. Our dashboard was widely used, with about 70 tips coming in that included pictures and locations. Imagine handling that through phone calls. Afterwards, we received a note from their police chief saying that we had helped save lives that day.

Rosslynva.org: Can anyone download and use your app or do you have to be part of a university or company that uses it?

SS: We have a couple of features that are peer-to-peer, and anyone can download the app and use them. Our SafeWalk feature enables you to invite up to three people to watch you walk from one point to the other. So, for instance, if you're walking home late at night, someone you invite can track your progress on the app or on a webpage and you can chat with each other. We've also created a drive mode for this feature that's called SafeDrive. This is especially useful for people who use ride-sharing services. SafeWalk and SafeDrive pull the estimated walk or drive time from Google Maps so the person tracking you will have a sense of when you should reach your destination. If you don't arrive when you were supposed to, it will trigger an alert.

Rosslynva.org: Tell about your company culture. What's it like to work at LiveSafe?

SS: Even though we've grown significantly since our startup days, we still have a small-company feel, and we like that. We also have a very inclusive culture. We have some employees commuting in from D.C. and we also have people from Fairfax and Loudon Counties as well as the immediate area. You'll see some employees dressed up in suits and some younger employees coming in on their scooters. People come from very different backgrounds—civilian, military, tech, education—but at the end of the day it's always about the mission. We care deeply and profoundly about it because we know it's about saving lives.

Rosslynva.org: What's next for LiveSafe?

SS: We're continuously evolving. We are about to launch our next-generation platform with a completely revamped dashboard. For now we're just testing it internally, so we're not sure when we will be releasing it, but it is evidence that we are not sitting still, and just like when we first started, we will push the envelope and keep innovating and improving. 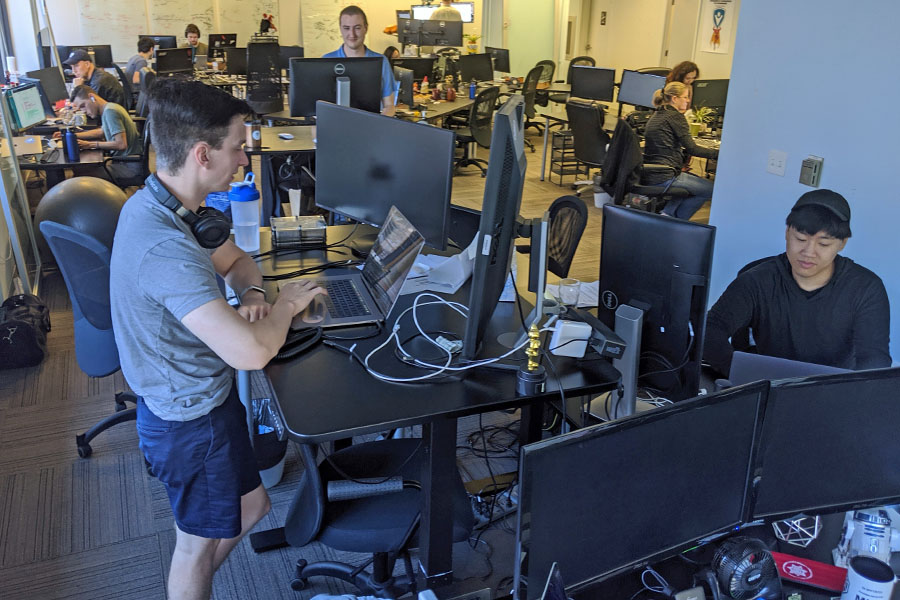 Photo at top: The LiveSafe team, which has grown to more than 70 people, poses outside their office in Rosslyn. Photo above: Staff hard at work at LiveSafe's offices in Rosslyn. Even though the company has grown substantially since its founding in 2013, it still has a low-key and informal workplace culture.