As warmer temperatures and longer days signal summer's impending arrival, we're gearing up for Rosslyn Cinema, one of our favorite annual events that, to us, embodies the relaxed and carefree spirit of our favorite season. This summer promises to be a standout year for Rosslyn Cinema. We are marking our tenth year showing free Friday movies in Gateway Park, and recently learned that Rosslyn Cinema has been named "Best Community Event" on Sun Gazette/InsideNoVA.com's annual "Best of Arlington" list. More than 16,000 people voted in this annual readers' poll, which recognizes a broad range of Arlington favorites, including performing arts venues, hair salons, restaurants and more.

"It's a tremendous honor to have Rosslyn Cinema singled out as the 'Best Community Event' in Arlington," says former Rosslyn BID Events Manager Sophie Barral. "Last year, we expanded it by adding games, food trucks and our Pub in the Park, where people can grab a drink and relax before the film starts. Adding these new features really took Rosslyn Cinema to a whole new level. More than a free movie night, Rosslyn Cinema became an inviting place for people to gather and enjoy warm summer nights with their friends."

Last year, Rosslyn Cinema brought 18,000 people to Gateway Park over the course of the summer. The most popular film was the 1942 Best Picture classic Casablanca, which drew a crowd of more than 1,200. Other popular films were Indiana Jones: Raiders of the Lost Ark, Top Gun and the kid-friendly Finding Nemo.

This summer, we're bringing back many of the same elements as last year. The Pub in the Park (pictured below) will open every Friday night at 6 p.m., serving beer, wine, sangria and mocktails. Patrons can relax at the large, shade-covered bar, gather around one of the many nearby tables, or enjoy an outdoor game while sipping their drinks. Like last year, there will be games such as cornhole, Giant Jenga, ping pong and Giant Connect Four.

Attendees can bring their own picnics, or they can enjoy a delicious dinner from food trucks that will be on hand. Two different trucks will join us in the park every week. This year's roster include favorites such as Captain Cookie, Rocklands BBQ, Fava Pot and Saffron Gourmet. Plus, Popped Republic! food truck also returns, serving gourmet popcorn every Friday. Kids' Nights are also back this year, featuring games and activities for kids and families prior to the movie's start. Bring picnic blankets or low chairs and secure a good spot early. By 7 p.m., it starts to get crowded.

This year, we've lined up what we consider to be a top-notch selection of films that we hope you will enjoy. There are classics, recent blockbusters and family-friendly favorites. We can't wait to have you join us! 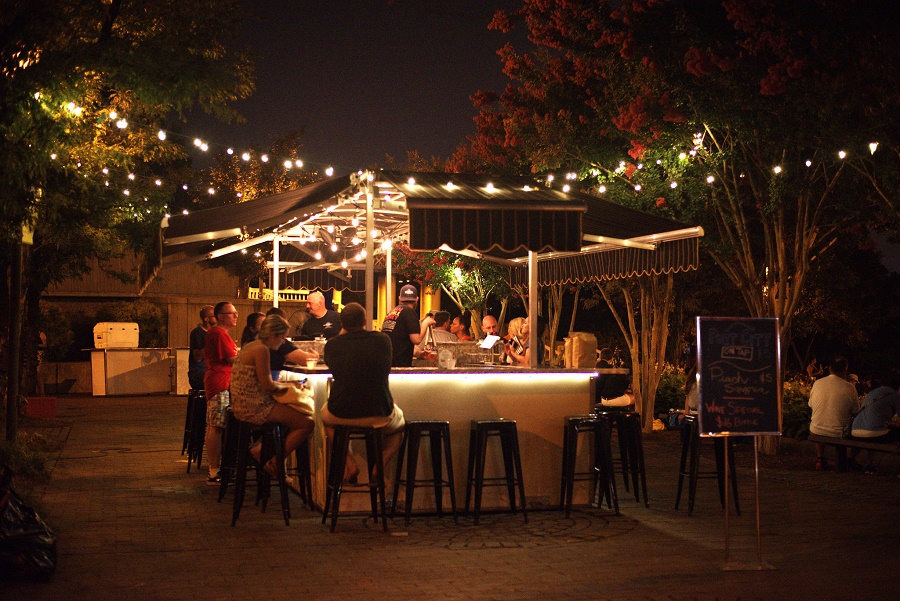