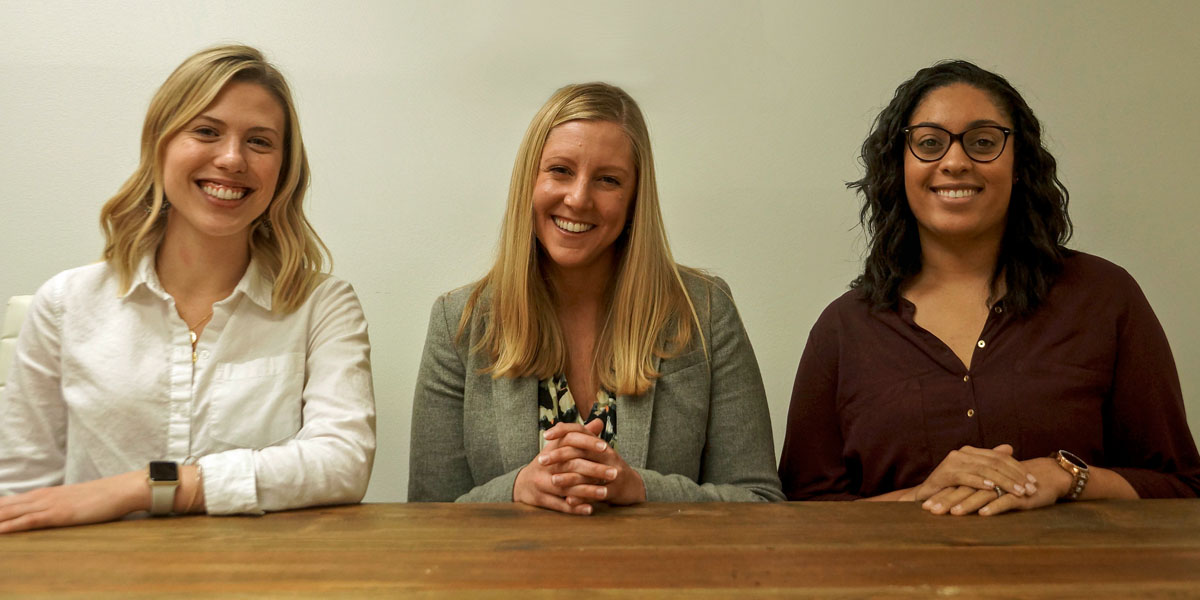 Years ago, an Esquire magazine survey uncovered a startling statistic: Fifty-four percent of women said they would rather be hit by a truck than be fat.

In her younger years, Christie Dondero Bettwy would have been one of them. Bettwy went on her first major diet the summer before starting college, beginning a pattern of behavior characterized by restricted eating and compulsive exercise. Upon graduation, her situation worsened. She struggled with the transition from undergraduate life to a full-time job and turned to dieting and exercise to feel better. As she shed pounds and friends and family began to compliment her on her appearance, her devotion to health and fitness grew. She never missed a workout, even if she wasn’t feeling well. She became rigidly obsessed with what she ate — to the point that it started to interfere with her relationships and everyday life.

Eventually, Bettwy recognized that she had a problem. She found support through a six-week course for people with eating disorders that was run by a local church and also started seeing a therapist. Today, she eats what she wants, exercises to a reasonable degree, and helps others facing the same struggles she did. She is now executive director of Rock Recovery, a Rosslyn nonprofit that provides comprehensive outpatient services for people with disordered eating.

Some (but not all) clients arrive on Rock Recovery's doorstep after having been hospitalized for illnesses like anorexia and bulimia. They engage with the nonprofit just as they are stepping down from a higher level of care. There is little transitional support for people with these illnesses once they leave inpatient care. Partly for this reason, relapse rates are high, averaging around 40 percent.1 By offering a clinical care program, therapeutic meals, mentorship, and a supportive community of peers, Rock Recovery bridges a critical gap in many patients' journeys to full recovery.

The organization was founded in 2008 by Cary Larson, who also struggled with an eating disorder as a young woman. While at first volunteers managed Rock Recovery, eventually Larson hired professional staff. The team worked out of church basements and donated conference rooms — wherever they could find space. In January 2019, they moved into their first office in Rosslyn, located at 1901 North Fort Myer Drive. Bettwy calls it their first home, and it’s easy to see why: Although there are workstations that look like they belong in a typical office, the space is also cozy, with comfortable couches, a kitchen, vases of flowers, artworks and warm lighting from table lamps. There’s a dining room, too, that features a long wooden table with a sign on the wall behind it that proclaims, “You can always sit with us.” Around this table, Bettwy and her team share meals with clients. By serving a variety of foods, the Rock Recovery team hopes to help clients recognize that all foods have value and that eating together can be a pleasurable experience.

“We should not think of food as something to be earned,” Bettwy says. “Why does it have to be compensatory? If you want a scone, eat a scone! Food is meant to be enjoyed. It’s about community.”

Although they help people with medically diagnosed eating disorders like anorexia and bulimia, the team at Rock Recovery also helps those with “disordered eating”— a term that captures other broad behaviors signaling that people need help but are not yet extreme cases. As Bettwy says, these individuals may not be able to check every single box for anorexia, bulimia or binge eating disorder, but they can check a few. She adds that the term “disordered eating” may sound less scary than “eating disorder” and may make clients feel less stigmatized.

“People think having an eating disorder is a choice or a sign of vanity,” she says, “but eating disorders are bio-psychosocial illnesses that have a genetic component. You’re predisposed to them or you’re not. Environmental factors also come into play, including media and family values. Life circumstances have influence, too. Trauma is one of the biggest triggers for an eating disorder. People often turn to or away from food as a means of coping and control.”

"People think having an eating disorder is a choice or a sign of vanity, but eating disorders are bio-psychosocial illnesses that have a genetic component. You’re predisposed to them or you’re not." – Christie Dondero Bettwy.

In February, during National Eating Disorders Awareness Week (February 24-March 1), Rock Recovery will host its annual gala at Convene in Rosslyn. Besides providing an opportunity for attendees to share a meal together and spend time in community, the goal of the event, Building Bridges Breaking Bread, is to increase awareness of eating disorders and raise funds so the Rock Recovery program can continue to grow. Because Rock Recovery provides clients with a high level of hands-on care, the cost of treatment is expensive, and while they have steadily increased the number of clients they have served each year, they want to continue growing.

“There’s an 80 percent gap between the cost of delivery of our services and what clients are able to pay,” Bettwy says. “We have a great new space here in Rosslyn where we can host support groups and therapeutic meals, so we're positioned to expand our reach. We just need staffing and the money to pay for it! Insurance doesn’t cover what we do, and a lot of our clients don't have the resources to afford the treatment they need. So, it’s really hard. We get multiple calls every week from people who are interested in our programming. We need to make sure we have the capacity to support them.”

Bettwy says getting funding to support mental health organizations and eating disorders specifically is tremendously difficult: These are still not topics that are widely discussed, even though she’s convinced everyone knows someone with an eating disorder. Anorexia is the second leading cause of death from mental illness, surpassed only recently by opioid use disorder. In addition, eating disorders affect more women than breast cancer.

“I’m hoping that, over time, we can encourage more people to recognize the importance of supporting this work,” she says.

To learn more about how you can support Rock Recovery or attend their gala on February 29, click here.

Do you ever worry that you are exercising and dieting too much? Do you ever worry about a friend? Or are you just interested in taking a deeper dive into this topic? If so, click here for excerpts from our interview with Bettwy. She tells how to recognize signs of disordered eating or compulsive exercise in yourself or a friend and how to seek help.

1. Most statistics in this article come from Rock Recovery's website or their annual report.