Finding your way around Rosslyn has never been easier

As Rosslyn grows and the neighborhood continues welcoming new residents, workers, businesses and retailers, the Rosslyn BID's placemaking team works behind the scenes to help make our urban core more vibrant. Our events and pop-ups like The Alcove tend to be the most visible manifestation of our efforts, but our urban planning and design initiatives are important, as well. They help shape the overall look and feel of the neighborhood and enhance its urban character. For instance, in March 2016, the BID introduced new streetscape furnishings to the neighborhood and in late May 2018, we helped launch Arlington County's first parklet.

Recently, former Rosslyn BID's Urban Planning and Design Manager Douglas Plowman collaborated with Arlington Economic Development, Arlington County's Department of Community Planning, Housing and Development, and several other departments within Arlington County to design 11 new wayfinding signs for the neighborhood. The new signs are more attractive and easier to read and follow than the last iteration. They include new points of interest and reflect current Rosslyn colors and branding. They also feature consistent maps, better color-coded and organized map points, and clear street identifiers at the top so walkers can quickly get their bearings. 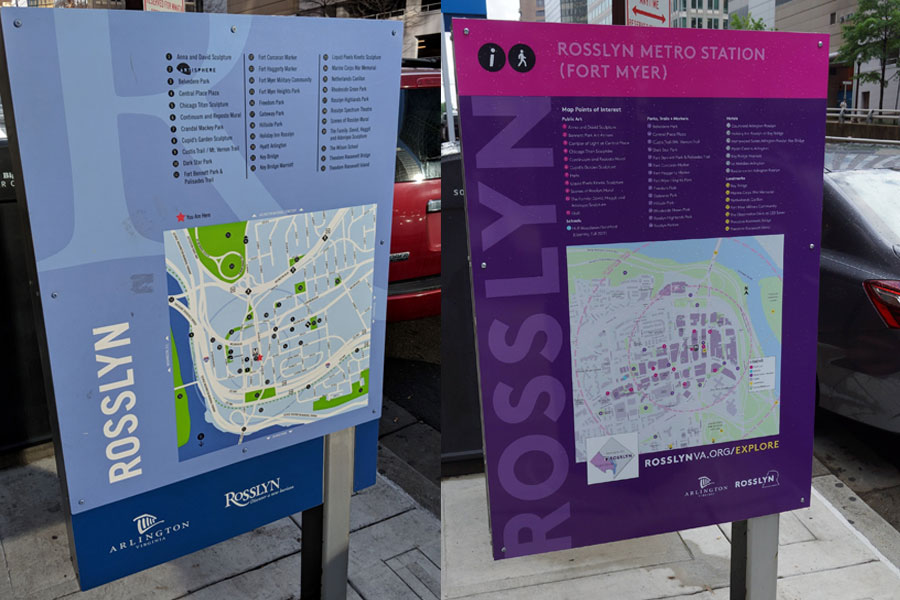 Before and After photos of wayfinding signage in Rosslyn. The updated signs include new points of interest and current Rosslyn colors and branding. They also feature consistent maps, better color-coded and organized map points, and clear street identifiers at the top so walkers can quickly get their bearings.

"I looked at examples of signage in other cities for best practices and really liked London and New York," Plowman says. "Once we'd settled on a design, we conducted usability testing with the help of our Operations Director Victor Carcamo to ensure the signs were clear and easy to understand. The people who will likely most benefit are visitors who may not be very familiar with Rosslyn."

The signs are part of a larger wayfinding initiative in Rosslyn that is grounded in the 2015 Rosslyn Sector Plan. The sector plan lays out a comprehensive vision for transforming Rosslyn into a more walkable, dynamic, live-work-shop-play urban center and gateway to Arlington. The Rosslyn BID will continue to partner with the County to find additional opportunities to improve neighborhood wayfinding. Stay tuned for updates!