Did you know Rosslyn was once renowned for its numerous brothels? Or that the neighborhood was the site of an important fort in the Civil War?

Arlington County, Virginia—an urban area of about 26 square miles located directly across the Potomac River from Washington, D.C.—was home to American Indian communities for more than 10,000 years and associated with major events in Virginia history for almost 400 years. Arlington is still a county, with no incorporated cities or towns within its boundaries.

Rosslyn has been a gateway to Arlington since 1843 when the remarkable Aqueduct Bridge and canal crossing the Potomac from Georgetown were completed. Its rich history, from its beginnings as a colonial ferry landing, to its Civil War military encampment, to the 1904 raid led by Crandall Mackey, provide a prelude to Rosslyn's exciting future . 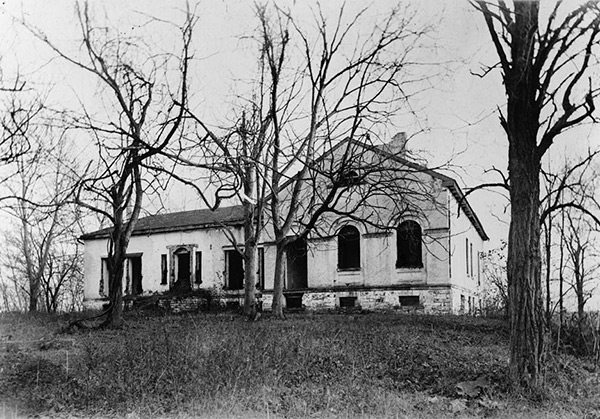 Journalist and travel writer Anne Newport Royall wrote in great detail of “Analostan” in 1828, part of which is quoted here:
I walked to General Mason’s house on the island; for he also has one in town, which he lives in one part of the year…Taking the whole together, it is the most enchanting spot ever beheld…everywhere redundant in the nicest touches of taste and skill-it staggers the belief such is reality and fills the mind with intoxicating pleasure…

Although this island, where we may say, Nature keeps her holiday, has so many allurements, yet it can be inhabited but a short part of the summer, it being sickly. In July they have to leave it, and return to town. This is really mortifying, it being the most delectable summer residence on the seaboard (Royall, The Black Book). Courtesy of Library of Congress Geography and Map Division. 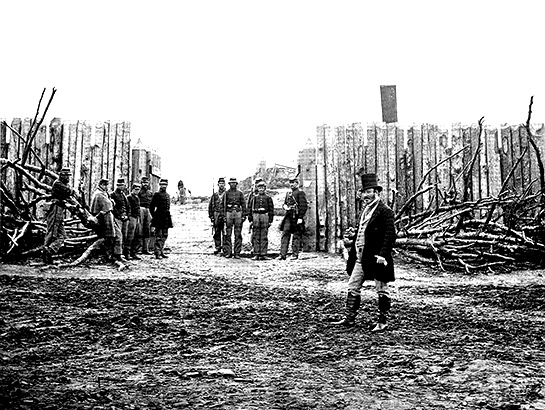 1530 N. Key Blvd., on the site of the Atrium (historic marker across the street)

During the American Civil War, Washington DC was protected by a circle of 68 earthen forts. Thirty-three of those forts were in Virginia protecting the three bridges over the Potomac River—the Chain Bridge, the Aqueduct Bridge and the Long Bridge—and formed what was called the Arlington Line. Part of this defense perimeter was Fort Corcoran, a bastion fort 576 yards in circumference, built on a hill above Rosslyn to protect the Aqueduct and the road from Falls Church (now Wilson Blvd.) Named for Col. Michael Corcoran of the 69th NY Volunteers.

Brothels, Bars, and Gambling Parlors: Where the Wild Things Were 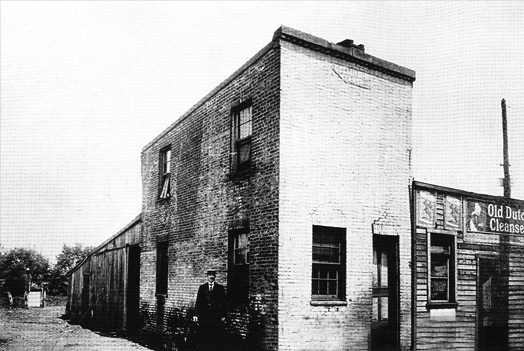 N. Moore at 19th Street, near the current location of Crandal MackeyPark

In the 1870s – 1890s, the Rosslyn neighborhood was home to a number of brothels and bars, many of which were open 24 hours. In addition, a short distance up Lee Highway was an area known as Dead Man’s Hollow, and the area was considered so dangerous that Virginia farmers returning from DC with proceeds from weekly produce sales frequently traveled in an armed convoy. A series of raids in 1905 led by Crandal Mackey, the Commonwealth’s Attorney, resulted in the closing of several illegal businesses and a “clean up” of the area. Mackey is pictured in front of Charles Knoxville’s Sunday Bar in a campaign photo of 1903.

Landmarks of the Past 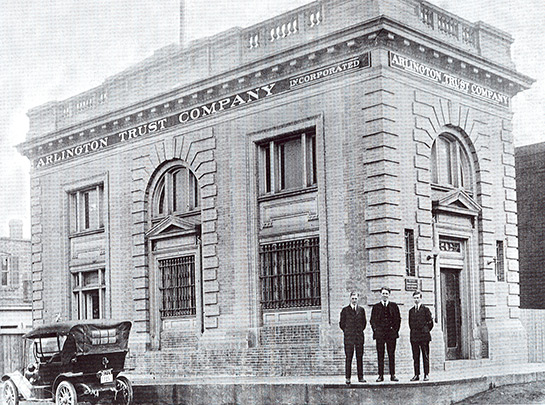 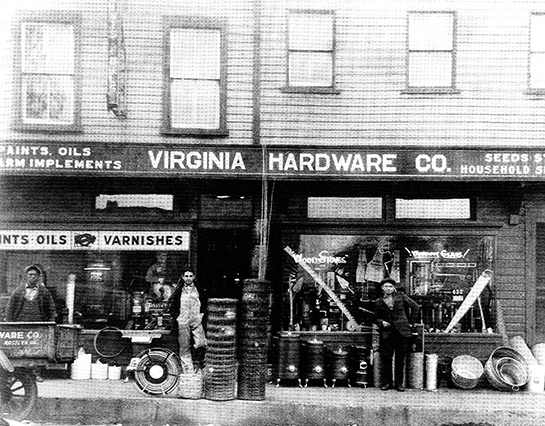 Virginia Hardware Company in Rosslyn opened in 1923. Harry Goldman ran the landmark business for many years. In 1963, it moved to Clarendon at 2915 Wilson Boulevard.

Near the entrance to KeyBridge

From 1896 through 1941, the neighborhood was a commuter hub for electric rail service, with three lines connecting Washington DC to Alexandria and Mount Vernon in one direction, to Fort Myer, Arlington Village, Nauck and Green Valley on a second line, and to Cherrydale, McLean, and Great Falls on a third line.

The Seedy Part of Town 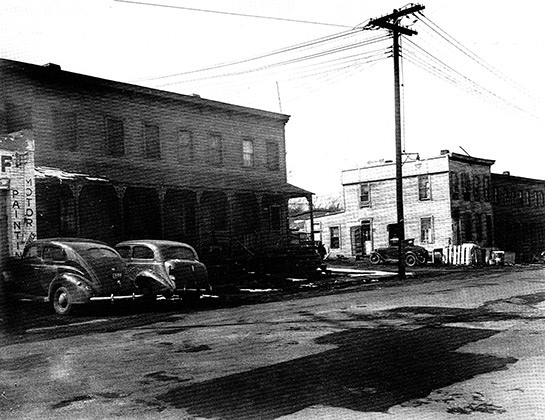 A quiet, daytime picture of Fort Myer Drive, also known as "Pork Chop Row." This neighborhood in Rosslyn was notorious for gambling, drinking, and other vices.

New Deal Housing: Apartment Complexes and the Building of a Suburb 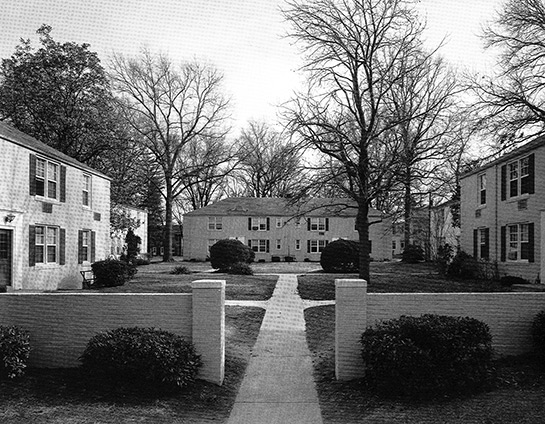 Between Lee Highway and Wilson Blvd. on Troy Street and N. 18th St.

During the 1930’s there was a major population rise in Arlington due to the influx of new government workers to run the New Deal programs of President Franklin Delano Roosevelt as well as the American planning effort for WWII. The resulting housing shortage led to the development of many FHA-supported garden apartment complexes. Several of these were built Rosslyn because of its proximity to the Capitol and its inclusion in a regional transportation network. 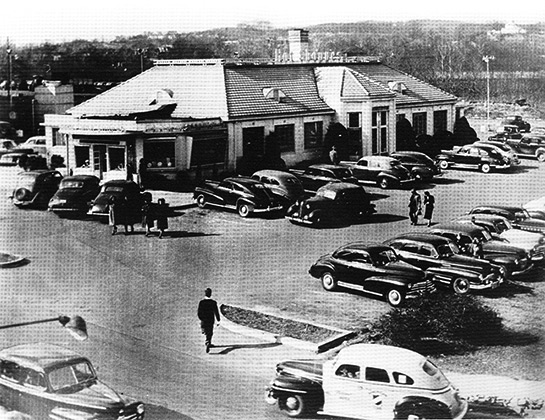 The Hot Shoppe in Rosslyn opened in 1940. Owner J. Willard Marriott said the one shown here, the tenth Hot Shoppe, was probably the most beautiful of all to that date (about 1949). "The Rosslyn Hot Shoppe is where you had to go after dances," according to 1943 Washington-Lee High School graduate Norman Trahan. 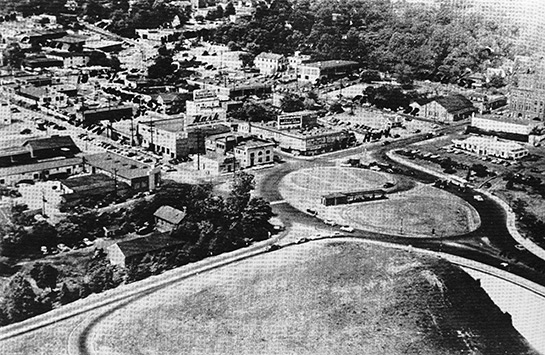 Unrecognizable today, this is the view from the previous image turned 180 degrees. Rosslyn retains its small-town, perhaps run-down aspect. The Cherry Smash bottling plant is in the far right, behind the Hot Shoppe. Just south of the circle is the venerable Arlington Trust Company. 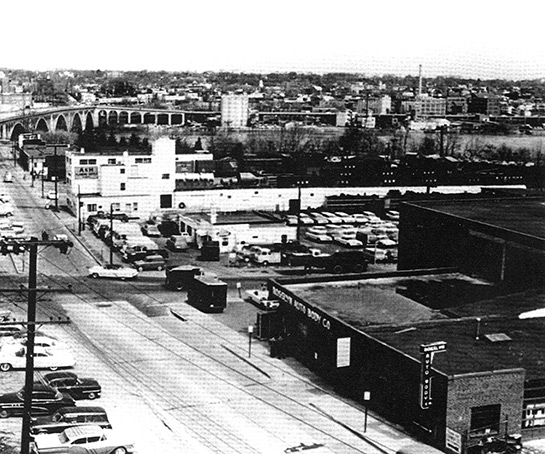 A view of Rosslyn along North Lynn Street, across to Key Bridge (and the Whitehurst Freeway) and Georgetown's slightly less industrial waterfront. Redevelopment has not yet come to Rosslyn, which still has parking in the center of Lynn Street in this photo from about 1962. 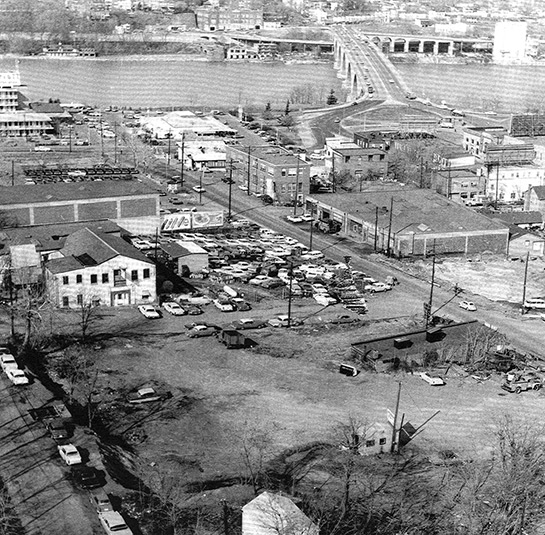 North Moore Street, one block west of Lynn Street, in 1963

The Building Boom of the 1960s 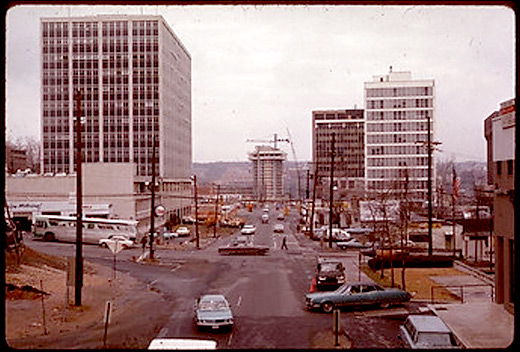 Civil Rights unrest of the 1960s and “white flight” from the inner city was one of the major causes for Rosslyn’s rapid development, as business and government agencies looked for office space that was close to the Capitol, but removed enough to be perceived as safe from rioting. Most of Rosslyn’s large office towers date from the 1960s and early 1970s. Many are now scheduled for redevelopment.